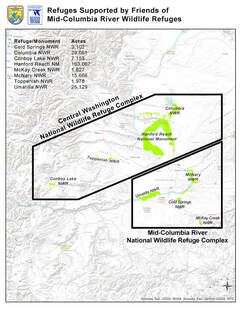 Click for PDF
The Friends of Mid-Columbia River Wildlife Refuges support 7 separate refuges and one national monument managed by the U.S. Fish and Wildlife Service.  These are considered part of either the the Mid-Columbia NWR Complex and the Central Washington NWR Complex.   These areas are maintained to provide an opportunity to experience a very diverse selection of plants, animals and birds that live in these areas or stop by as they migrate through this Southeast Washington. 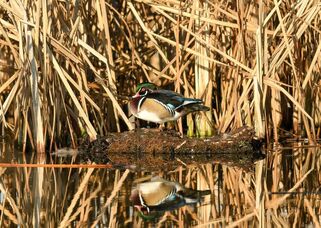 McNary National Wildlife Refuge
Extending along the east bank of the Columbia River in southeastern Washington, from the confluence of the Snake River to the mouth of the Walla Walla River, and downstream into Oregon, the McNary National Wildlife Refuge is a welcomed respite for migratory birds, native plants and other wildlife alike. McNary NWR was established in 1956 to replace wildlife habitat lost to construction of the McNary Dam. The 15,000 acres of sloughs, ponds, streams and islands—riparian and wetland habitat—as well as upland shrub-steppe and cliff-talus habitat are important to migratory waterfowl, shorebirds and songbirds. Few areas in North America support such dense concentrations of waterfowl; more than half the mallards in the Pacific Flyway overwinter at some time in this portion of the Columbia River Basin. McNary NWR also supports excellent populations of raptors, a host of mammal species, and as many reptiles and amphibians as can be found anywhere in the Columbia Basin.
The McNary US Fish and Wildlife web site
US Fish and Wildlife McNary brochure
Map of McNary Refuge 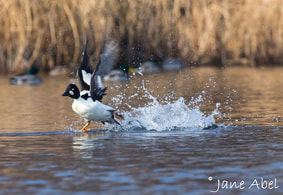 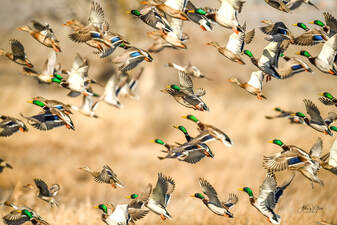 Umatilla National Wildlife Refuge
Umatilla National Wildlife Refuge is a network of lands bordering the Oregon and Washington shore lines of the Columbia River. Established in 1969 as mitigation for habitat lost through flooding from the construction of the John Day Dam, the wetlands of Umatilla provide an oasis for waterfowl, especially in the winter. Comprised of five units—three in Washington and two in Oregon—the refuge's 23,555 acres offer a broad collection of habitats and wildlife species. Natural and managed wetlands, mixed with native shrub-steppe, provide homes for an abundance of Columbia Basin species. Providing waterfowl habitat is a major focus of the refuge, but many other species call the place home throughout the year. Umatilla NWR also supports populations of long-billed curlews, many passerine species, large herds of mule deer, northern sagebrush lizards, and dense stands of native milkweed that support monarch butterflies.
The Umatilla US Fish and Wildlife website
Umatilla Refuge Map 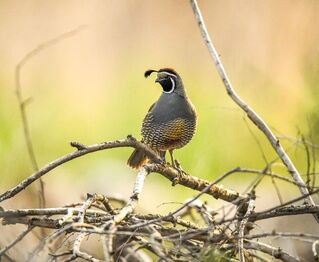 McKay Creek National Wildlife Refuge
The 1,837-acre refuge was established in 1927 as a refuge and breeding ground for birds. Waterfowl, water birds, and shorebirds all use the reservoir throughout the year, while deer (mule deer and white-tailed deer) frequent the uplands and willow thickets. Passerines and great horned owls make use of the riparian trees surrounding the reservoir. The refuge overlays McKay Creek Reservoir, a U.S. Bureau of Reclamation (BOR) storage facility, serving the irrigation needs of the Umatilla River Basin. The U.S. Fish and Wildlife Service manages the lands, whereas the water levels are regulated by the Bureau of Reclamation . At full pool the refuge consists of 1,300 acres of water and 537 acres of upland. The reservoir relies entirely on run-off from the Blue Mountains feeding McKay Creek. The refuge serves as a recreational mecca for residents of nearby Pendleton, Oregon. Fishing, bird hunting, and swimming are popular activities, while other visitors simply enjoy bird watching, wildlife photography, or nature.
The McKay Creek US Fish and Wildlife website
McKay Creek Map
McKay Creek Recreational Map PDF

Hanford Reach National Monument
The arid lands of south-central Washington harbor some of the last remaining shrub-steppe habitat in the state. Thousands of acres of this land, the Hanford Reach of the Columbia River and the Saddle Mountain National Wildlife Refuge became the Hanford Reach National Monument in 2000 to protect rare plants, wildlife, and remnants of human history. Located near the Tri-Cities, the 196,000-acre Monument is open, treeless country punctuated by steep rolling hills and canyons. Sagebrush, bunchgrasses, wildflowers and a thin microbiotic crust cover hills and plains. The Monument, like the other Refuge lands in area, lie within the rain shadow of the Cascade Mountain Range. The Monument contains shrub-steppe, riparian, and aquatic habitats. The 51-mile -long Hanford Reach is the last free-flowing, non-tidally influenced stretch of the Columbia River in the United States. The Monument offers a number of recreational opportunities to the public include canoeing and kayaking the river, fishing, hunting, and hiking. Most of the area, except the islands, are available for public recreation. Be sure to call or check their website for additional rules and regulations.
The Hanford Reach National Monument US Fish and Wildlife website
The Hanford Reach National Monument Map
The Hanford Reach National Monument Recreational Map PDF
Conboy Lake National Wildlife Refuge
Conboy Lake National Wildlife Refuge is a scenic gem within the National Wildlife Refuge System with lush seasonal marshes, vibrant forested uplands, and Mount Adams as the backdrop. The Refuge, nestled near the foot of Mount Adams in Washington's Cascades Range, is located within an easy drive of Portland, Oregon, and offers solitude for visitors coming from metropolitan areas. Conboy Lake is a haven for rare animals and plants, historically supporting the largest population of the federally threatened Oregon spotted frog and serving as the epicenter of the only Washington breeding population of the state endangered greater Sandhill crane. A blend of oak, pine and aspen forests, grassy prairies, seasonal wetlands, and streams provides a rich habitat diversity that supports healthy populations of migrating waterfowl, songbirds, and elk that can be commonly seen along Refuge roads. An early pioneer home listed on the National Register of Historic Places, the Whitcomb-Cole Hewn Log House, still stands near the Willard Springs trail head and is open to the public.
The Conboy Lake US Fish and Wildlife website
US Fish and Wildlife Conboy Lake Brochure
Conboy Lake Map
Conboy Lake Recreational Map PDF
Toppenish National Wildlife Refuge
Spread across the Yakima Valley, Toppenish National Wildlife Refuge offers a broad collection of habitats and wildlife, with migrating waterfowl populations being a major highlight. The entire Refuge is situated within the floodplain of Toppenish Creek, a year-round tributary of the Yakima River, and is an important link in the chain of feeding and resting areas for waterfowl and other migratory birds using the Pacific Flyway. Natural and managed wetlands, mixed with shrub-steppe and streams, provide homes for most species found in the Columbia Basin, and Toppenish Creek also supports the federally listed Mid-Columbia River steelhead. The Refuge is well-known for its waterfowl hunting opportunities, and those same waterfowl, along with many other species of waterbirds, shorebirds, and passerines, draw in serious "birders." The spring and fall migration periods are especially exciting times to visit the Refuge, but many species of songbirds can be seen and heard along the walking trail throughout the spring, summer, and fall months.
The Toppenish US Fish and Wildlife website
Toppenish Refuge Map
Columbia National Wildlife Refuge
Columbia National Wildlife Refuge is a scenic mixture of rugged cliffs, canyons, lakes, and sagebrush grasslands, comprised of nearly 30,000 acres. Located in the rain shadow of the Cascade Mountain Range, the Refuge averages less than eight inches of annual precipitation, resulting in an arid environment. In winter, large numbers of waterfowl roost and loaf on the typically open waters of Royal, Upper Hampton and Lower Hampton Lakes, and feed in the nearby agricultural fields. The largest concentration of ducks, geese and lesser Sandhill cranes arrive on the Refuge in March and April. At times, these individuals will number over 75,000! In addition to bird watching, the Refuge offers a wide variety of recreational activities such as hiking, hunting, fishing, and wildlife observation.
There are 4 trails open March through September
Columbia US Fish and Wildlife website
Columbia Refuge Map
McNary, Umatilla and McKay Creek photos by Adam Steele